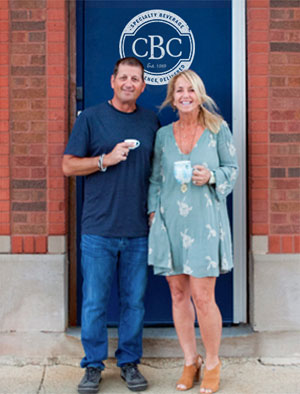 Steve & Emily Gorelik’s story began as college sweethearts at Arizona State University where the two began dating (and living together) junior year in college. After graduating in 1986, they put their college degrees to work in the Valley of the Sun. Emily worked for an Investor Relations Consulting Firm; Steve worked for a Food Broker, repping powerhouse lines including Tyson Foods and Sara Lee. Their entrepreneurial spirit was always on the forefront when an opportunity presented itself with the local China Mist Iced Tea company. Shortly after they got married in June 1989, the Goreliks moved to Chicago to become the area’s exclusive distributor of China Mist. Thus, CBC Specialty Beverage was founded on October 1, 1989.

The Gorelik’s reputation for integrity, quality, and service eventually gained them significant relationships with some of Chicago’s top restaurant groups. 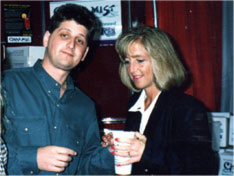 Selling iced tea in a cold weather state was challenging but the Goreliks relocated and set up shop. Using their garage to warehouse product, Steve took to the street cold-calling, installing tea brewers, and delivering product out of his car. Emily supported the couple by working at a prominent suburban company while doing the Company’s books at night, and making deliveries on her way to and from work. By 1999, CBC had grown to be the second largest distributor of China Mist in the United States, but more importantly the Gorelik team realized they had a unique specialty beverage niche.

That same year, Steve and Emily teamed up with Intelligentsia, a local Chicago specialty roaster. After 10 years of solely selling iced tea (in a cold-weather market, no less), their product portfolio was now complimented with their first coffee and espresso offering. Their professional life had taken on a new, more defined direction. Personally, the couple was actively raising their two children. Emily worked from home, raising Sam and Zoie; together they coached, carpooled, and spent their off-hours at endless soccer, basketball, and dance tournaments. 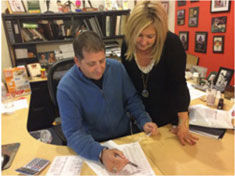 The Gorelik’s reputation for integrity, quality, and service eventually gained them significant relationships with some of Chicago’s top restaurant groups, as well as other national manufacturers of hot and iced tea who wanted to make in-roads into the Chicago food service market. Partnerships were formed with Lavazza and LaColombe, as well as Mighty Leaf Tea and Harney & Sons, to round out their portfolio of coffee, espresso, and tea offerings.

In addition, the Company began private-labeling their own iced tea. “Tea Cubed®” is a house blend, value-added iced tea alternative.

Now a distributor and sales agent for 10+ manufacturers, the Company was pioneering unthinkable growth. By now, Emily was working full-time at CBC running the Accounts Receivables department and putting her Marketing/Public Relations background to work. Steve continued as the driving force of Sales, and focused on expanding and developing a Service Department to keep up with the growing equipment/asset maintenance that came with the tremendous growth in product lines. 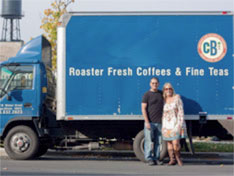 Built upon its foundation of integrity, quality, and service since 1989, CBC has emerged as a leading national distributor of coffee, espresso, and hot and iced tea, serving thousands of customers across the country with dozens of premium brands. CBC has grown from a husband-and-wife team operating out of their garage to an incredibly diverse team of nearly 60 employees operating multiple warehouses. What started out as single state distribution company, CBC now services customers in over 44 states nationwide.

Despite CBC’s expansive growth, the Company has been able to maintain fierce loyalty from their employees, several of whom have been with them for over 10 (even 20) years! This tenure is a product of the Gorelik’s kindness, guidance, and mentoring their employees to be the best versions of themselves – both personally and professionally – and providing them with the tools to succeed. In doing so, they have created an incredible sense of family among their team. Today, Steve and Emily remain very active in the leadership and day-to-day operation of the Company, as well as continuing their longstanding customer relationships.